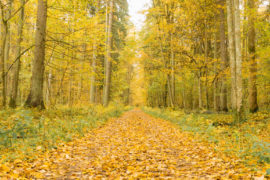 Białowieża Forest is a special place, yet surprising numbers of people outside Poland have never even heard of it. This is a shame, as it’s one of Europe’s few natural wonders – a primeval landscape and a hotspot of biodiversity. If that’s not enough to compel you to visit, here’s a list of 10 reasons why it’s a worthwhile destination for your next adventure.

1. It’s the last forest of its kind. Europe was once blanketed in a vast, ancient primeval jungle. But over the course of history, this was almost entirely cut down to make way for towns, agriculture and commercial forests. Against all odds, one small fragment survived: Białowieża Forest. A walk through here is like stepping back in time, allowing you to see how lowland Europe once looked like, replete with meandering rivers, extensive wetlands and wild animal communities. It’s a truly prehistoric landscape.

2. Ancient, natural trees. Trees are allowed to reach grand, old ages here. What’s more, is that most trees in Białowieża Forest are unplanted ‒ they germinated naturally. This allows you to see how natural dynamics create forests with trees of a variety of ages and species: gnarly, centuries old trees form the canopy of the forest, and underneath grow their youthful descendants. This is in stark contrast to the even-aged monocultures of managed forests, where trees are cut down before they reach maturity.

3. The European bison, the last of Europe’s megafauna. After the last ice-age (11,000 years ago), humans advanced across the continent and decimated populations of all larger species. Mammoths, rhinoceroses and aurochs were hunted to extinction, till only the bison remained. Against all odds it was saved from oblivion in Białowieża Forest, due to the centuries of protection granted by Lithuanian, Polish and Russian kings. Check out a previous article of mine to read about the epic history of the European bison’s survival, extinction, and remarkable reintroduction.

4. Here lies astonishing diversity, not just in terms of the sheer number of different and often rare species, but also in terms of the variety of forest types. A short walk can take you from a purely coniferous forest, to a wet, leafy forest, and then on to unique bog forests. This mosaic of different landscapes was the natural order of things, till humans came along and simplified the continent by draining swamps and straightening rivers.

5. One of the last strongholds of many rare species. Many of these are typical for old-growth forests and are thus extinct or incredibly rare elsewhere. Take the three-toed woodpecker for example. This picky guy nests almost exclusively in dead or dying spruce trees over a hundred years old. Suffice to say, these trees are rare across most of Europe. Białowieża Forest is thus one of the last hideouts for this and many other relict species, due to its many rare types of habitat.

6. Proof that biodiversity and mankind can live side by side. Białowieża is often described as primeval, but it is by no means ‘untouched’. In fact, humans have played a large role in shaping the forest’s structure, for example through their hunting of herbivores, grazing of farm animals inside the forest, or logging. But despite this (sometimes heavy) pressure, the forest has retained its natural character. This is because aside from during a few mostly wartime years, the forest’s resources have been sustainably exploited. This nicely shows how if we make space for nature, it can survive and even thrive amongst modern civilisation.

7. Abundant natural processes. In managed forests, the life and death of trees is heavily controlled. Trees are planted, cut down, and then replanted; any surprises, like tree diseases, are quickly exterminated. This sequence of events is incredibly simple, and leaves little room for natural processes, such as decomposition and natural selection. In the more natural parts of Białowieża Forest though, nature is left to its own devices. Trees live and die of their own accord, and the abundance of dead wood lying on the ground is evidence of this. An oak may live for 500 years, before falling over, whereupon it begins its second life, decomposing for decades more, and forming habitat for a myriad of dead wood loving species. This is extremely rare in Europe.

8. The history. Białowieża Forest survived only because it was adored by royalty and subject to their protection. It was a tribal wilderness till as late as the 12th century. Around this time, Polish and Lithuanian kings took a liking to it, and made it their private, protected hunting ground. Over the centuries, epic hunts were organised, palaces were built and empires conquered these lands. But it was only after Europe fell into total war in the early 20th century that the full protection ended. This all amounts to a story of epic proportions, which continues to this day in the ongoing battle to save the forest from intensive logging and gain it protection as a national park.

9. Visit Belarus. The enigmatic and reclusive last dictatorship of Europe is just next door. Historically the entirety of Białowieża Forest was Polish (and Lithuanian), but the aftermath of WW2 split it in half with the Polish-Belarussian border. In the 1970s, the Soviets built a border fence, isolating the eastern portion of the forest. But signs of change are now emerging. In an effort to attract the increasing numbers of tourists visiting the forest, the Belorussian authorities recently introduced a three day pass for tourists. This allows for adventurous souls to cross into the Belarussian side without going through the long and arduous process of getting a visa.

10. Seasonal variety. The forest undergoes remarkable seasonal changes, and each time of year has its air of magic. From the beautiful bleakness of winter, when the forest is asleep and carpeted in snow, to the freshness of spring when the forest rushes to come alive once again, to the leisurely warmth of the summer sun, and finally to the astonishing colours of autumn. All seasons are different and worth seeing with your own eyes.

Ice fishing. I never imagined I'd see an Arctic sc

This is the view over Morskie Oko, a glacial lake

Now I'm stuck in Wales because Boris scared the wo

In the autumn cranes flock together and fly south

A picnic spot from Narnia in Białowieża Forest #

This wonderful, curious fella approached to within