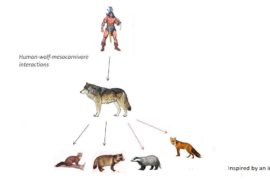 We were recently overjoyed to hear that the Polish National Science Centre is to fund our further study of how wolves affect European ecosystems. This work will be a continuation of the now world-famous research coming out of Yellowstone National Park, where it was well established that the reintroduction of wolves repaired long lost ecological functionality: the presence of wolves in the national park had profound effects on the wolf’s prey species, not only on their main prey (the deer), but also on their smaller carnivore competitors like the coyote and fox.

While we now know much about the effects of wolves on American ecosystems, Europe remains largely unstudied in this respect. And since our research group has already worked out a fair bit on how wolves affect deer in Europe, we will now uncover the second half of the picture: how wolves affect medium-sized carnivores (like the fox and badger). Here’s the brief popular summary of the project that I wrote as part of the proposal.

Large carnivores such as the wolf have important effects on their prey. On the one hand they can directly affect their numbers by eating them. On the other hand, they can indirectly affect their behaviour or spatial distributions by scaring them. Several recent studies have shown that these indirect effects of carnivores are very ecologically important and perhaps even more important than the direct effects. Further, most of these studies have focused on the effects of wolves on herbivore prey (such as deer), whereas perhaps just as importantly wolves also influence their smaller carnivore competitors (such as the badger and fox − referred to as mesocarnivores hereinafter).

We know that population levels of mesocarnivores decrease in landscapes where large carnivore numbers are high, but the mere presence of large carnivores instils fear in mesocarnivores, which causes them to avoid risky areas and display various energetically costly lookout behaviours. Where these ecosystem processes function as normal (e.g. in natural environments) they can have many positive effects further down the food chain – mesocarnivore prey gain respite from predation. Much research was carried out in Yellowstone National Park after wolves were reintroduced in 1995. Here, aside from the huge impacts of wolves on deer, wolves seriously impacted mesocarnivores too. Coyote densities decreased by almost half within 2 years, but perhaps more importantly, they were far more wary, and started avoiding areas when and where wolf activity was high. As a result the abundance and diversity of small mammal species (coyote prey) increased. However, the implications of these ground-breaking discoveries for European ecosystems is currently unknown.

This is because this previous knowledge mainly comes from wilderness areas or relatively natural landscapes with low human densities – systems that are not very representative of the types of forests we have in Europe, particularly in central and western Europe. Here, landscapes are heavily impacted by humans, who modify the ecological role of large carnivores in several ways. This subject has been gaining in importance over the last few years as wolves are now protected in most of Europe, and populations are recovering and recolonising lost territories. But we actually do not know whether wolves will be able to fulfil their natural ecological role, and particularly whether wolves will be able to regulate their mesocarnivore competitors in European anthropogenic landscapes. This knowledge is urgently needed due to the conflicts that mesocarnivores cause: they eat livestock; pose health issues for humans, pets and livestock via their transmission of diseases such as TB and rabies; and perhaps most importantly, they can severely impact biodiversity. All of these problems are worse in areas without wolves, and in areas heavily impacted by humans compared to more natural landscapes.

So we designed this project to find out whether recolonisation (or reintroduction) of large carnivores has the potential to restore ecosystem functionality and mitigate these conflicts. We chose a set of woodlands near Warsaw, Poland as our study sites. Two of these host wolves and two do not, and all are home to several mesocarnivore species. Within these sites we plan to establish an array of camera traps to monitor mesocarnivore behaviour and spatial distribution to answer the following questions:

We have already gathered similar data in one of Poland’s and Europe’s least disturbed forests, the Białowieża Primeval Forest. So by comparing the answers to these questions with the data from Białowieża we will be able to find out whether humans are diminishing the important ecological role of large carnivores in anthropogenic landscapes compared to more natural ones. This knowledge is urgently needed to predict the ecological effects of the ongoing large carnivore recolonisation of European anthropogenic landscapes.

0 comments on “The Wolf – Our research”