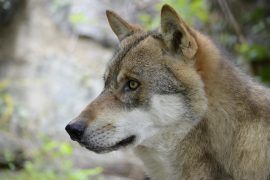 I’ve spent the last year or so writing my Master’s thesis on wolf conservation. The project was a resounding success, and today the paper reporting the results was finally published in PLOS ONE. So a big shout out to my colleagues at the Association for Nature ‘Wolf’ the Conservation Genetics group and the Mammal Research Institute, without whom the project wouldn’t have been possible. Here’s a short run down of what it was all about.

One of the most effective ways to conserve biodiversity is the creation of protected areas. By protecting critical habitats, national parks, nature reserves and Natura 2000 sites ensure that our rare species will continue to have a place to live. Though they’re little known, Natura 2000 protected areas also exist in the UK. But in fact, Natura 2000 is the European Union’s flagship biodiversity programme – a network of protected areas spanning the entire EU, protecting 18% of land in EU countries, and 6% of the sea – encompassing the continent’s most endangered species and their habitats. The only problem being, that protected areas are a very static form of protection, often ill-equipped for reacting to changes in the environment.

One of the biggest recent changes in European nature has been the recovery of European large carnivore populations. The most remarkable of which has been that of the wolf. Its protection across most of Europe over the past 20 years has allowed its populations to recover across large parts of the continent, including western Poland.

The EU’s Habitats Directive mandates the creation of Natura 2000 protected areas to protect core areas of wolf habitat, which has played a key role in the recovery of the wolf. However, the Natura 2000 network was designed prior to the wolf’s recent recovery, which raises the question of whether the (potentially outdated) network is sufficient to protect the contemporary, wider range of the wolf.

So to find out whether the wolf is being sufficiently protected in Poland we investigated this question. My colleagues and I looked at the overlap between the current range of the wolf and the Natura 2000 network. We assumed that a minimum of 20% of the wolf’s habitat should be protected by Natura 2000.

Across the whole of Poland, 22% of the wolf’s habitat is protected within Natura 2000, but there are great regional variations in this coverage. As the Large Carnivore Intiative for Europe identified three distinct wolf populations in Poland, we then carried out separate evaluations for each population. It turned out that the best protected population is the Carpathian population, with  47% of its habitat protected. Next was the Baltic population, with a respectable 28%. By far the worst off was the recently recovering and still endangered Central European population with 12%.

Based on these results we drew up recommendations for expanding the Natura 2000 network in western Poland. Our paper identifies the forests that most require additional protection, which if protected will allow Poland to fulfil its Habitats Directive obligations. ‘It’s worth remembering’ says my supervisor Dr Robert W. Mysłajek, ‘that the protection of wolves brings tangible benefits to society, for example their predation on wild boars decreases the transmittance of African swine flu (ASF) across the landscape’.

We finish off the article by suggesting that similar evaluations to ours may be beneficial in other countries experiencing a similar large carnivores recoveries. This would allow gaps in the Natura 2000 network to be filled and for large carnivores to be better protected across the whole continent.