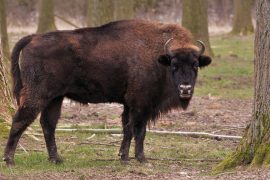 European Bison are Europe’s biggest land animal, which once roamed almost the entire continent from Russia to Spain. Their numbers gradually dwindled over the last millennium till only two populations survived – one in Białowieża Forest, and another in the Caucasus. These two lonesome populations existed for a couple of centuries, until ninety years ago they came to a tragic end: war and empire drove European bison to extinction in the wild.

A few individuals thankfully remained in zoological collections. So a breeding programme was promptly started, but reintroductions had to wait till the horrors of WW2 had passed. Finally, in 1952 the first individuals were release back into the wild in Białowieża Forest. Other populations soon followed and have flourished – the reintroduction programmes have turned out to be a resounding success, perhaps even more historic than the recent recovery of the wolf. And amazingly, all living European bison descend from just 12 individuals.

There are now 6,573 bison in the world, of which 5,500 are free ranging, wild bison. About half of the world total lives in Poland and Belarus, while another 1000 live in Russia.

There are 5 isolated populations in Poland.

As the stronghold of the European bison for the last thousand years, Białowieża Forest remains the focal point of the world’s European bison community. Around 600 of these animals live in the Polish part of the forest, with another herd living over on the Belarussian side, where another 500 individuals roam free. Apparently though, there is little, to no mixing of bison between these herds, partly due to a border fence lining the Belarussian side of the border.

The following table describes Poland’s five bison populations. Their numbers correspond to the map above.

These populations are rather fixed in place, and bison rarely move outside of their home forests. This is despite research suggesting bison were originally a plains species that migrated seasonally to ensure themselves a food supply. Unfortunately, migrations are no longer possible in Europe as farmlands form an impenetrable barrier across the landscape. This has the potential to pose problems for bison, as forests have little food for them to eat in winter. So to dissuade them from stripping bark off trees and raiding agricultural landscapes in search of food, hay is left out for them in winter. Bison that roam too far away from their herds tend to be captured and released back at home.

There’s one last point of note. There are two separate lineages of European bison, which are kept away from each other to prevent interbreeding. This is because historically there were two subspecies of European bison: a lowland variety inhabiting Białowieża Forest, and a highland variety inhabiting the Caucasus Mountains. Unfortunately, by the late 1920s, only one individual survived from the highland lineage – a Caucasian male. This male was subsequently crossed with a lowland female, to produce a crossbreed lineage. Wildlife managers have since kept descendants of this male separate to maintain the two distinct genetic lineages. In Poland, the only population of the highland-lowland crossbreed lineage lives in the Bieszczady mountains, the four other populations being of the purebred lowland variety. In any case, despite being an interesting historical anecdote, there’s little distinguishing these two varieties, aside from some minor differences in their coats and hooves.

Other free-ranging herds can be found in Lithuania, Belarus, Ukraine, Romania, Russia, Slovakia, Latvia, Kyrgyzstan, and Germany, and in forest preserves in the Western Caucasus.

Fun fact: While nowadays bison don’t migrate, they do occasionally venture outside their designated conservation zones. A few bison have even attempted trips of >100 km2, the most adventurous being a 7 year old bull who wandered over 700 km in 1981. He left his home in the Bieszczady mountains on the Ukrainian border (No 2 on the map), and was first spotted in a forest 300 km to the north. He then promptly vanished, evading capture for over a month before reappearing bewildered in a forest not far from Warsaw. This bold bull has thus gone down as the most adventurous bison in modern history.

To find out where Poland’s other iconic species live check out my other status maps of the wolf, lynx and bear.