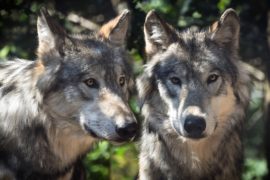 We have more in common with wolves than meets the eye. And I’ve always felt that if more people knew this, it could help transform public opinion, making the species far easier to protect. But as it is, accurate accounts of these mysterious animals remain rare. This piece on the intimate private lives of wolves is an attempt to help change this state of affairs. I hope you enjoy.

Like humans, wolves are social creatures. In fact, the similarities between us are striking: wolf society is made up of wolf families, each comprising an adult male (the dad) and female (the mum) and their offspring. In this post I’ll briefly tell the tale of how young wolves grow up with their parents and then migrate away in search of love, to establish a family of their own.

In the beginning wolf pups are born into the caring environment of their parent’s family, with whom they stay for two years. Over this period of wolf childhood, parents teach their pups the art of being a wolf.

Pups quickly grow bigger and stronger, and by the end of their first year they are almost adult size. But these wolf teenagers are not yet ready for life on their own. They must spend a second year with their parents, fine tuning their hunting skills and looking after their younger siblings.

After their second summer, wolves are just about adults and begin to get itchy feet: they instinctually begin to desire a place of their own to call home. To realise this dream, they must fly the nest in search of their destinies.

Instinct drives young wolves to migrate away from their parents. Their aim: to find a life partner and establish a territory.

A territory is simply a patch of land to which a wolf family has exclusive rights and defends from intruders. The establishing of territories is a common life strategy among animals, and it allows them to monopolise resources in an area. For wolves, these resources are, of course, prey species – their food.

But across the wolf range, from the deserts of the arctic, to the deer infested forests of Europe, prey densities vary wildly. Thus to secure themselves an ample food supply, wolves vary the sizes of their territories. The largest ever-identified territory was in Alaska (in an area where food is very scarce) – a whopping 6,272 km2 – over a quarter the size of Wales! More conventionally though, as in Poland, wolves inhabit territories between 100-250 km2.

Once wolves establish a territory, they mark them to keep intruders out and away from their precious resources. In contrast to humans though, wolves thankfully don’t put up masses of fencing to keep foreigners out. Instead they keep it simple: they mark their territories by shitting and pissing all around their land. When neighbouring wolf families or other intruders encounter these markers, they instinctually know to stay away. Those that miss or ignore the markings tend to be promptly chased away.

An interesting consequence of territoriality in wolves is that it creates a limit on population densities: wolves can never become overpopulated, as two packs cannot occupy the same patch of land. The Polish side of Białowieża Forest (640km2) exemplifies this nicely. For the past 20 years, four wolf packs have inhabited the same four locations in the forest – see the picture below. There is simply no room for any more wolf families, and so each year the younger generation migrates away. The wolf population in the primeval forest thus stays at stable levels from year to year.

To establish a territory a young wolf must disperse

Dispersal is the term for the journey upon which young wolves embark to find themselves a territory.

Some disperse near their parents, and others migrate over remarkable distances, travelling even hundreds of miles. But the objective is always the same: to find a mate and set up a territory.

Only the lucky wolves stay near their parents, when there are unoccupied forests nearby (that is, unnoccupied by other wolf families). Those less fortunate embark on a risky journey, sometimes across entire countries. These bold adventurers often must cross roads, farmlands, and even towns and villages in search of a territory of their own. See here for a map of several GPS collared Belorussian wolves – two of them have crossed international borders during their dispersal.

Like in many other mammal species, young males disperse across the furthest distances. Females generally stay closer to their parents. This phenomenon has interesting consequences – often when wolves are recolonising areas from which they were historically exterminated, males can find themselves in forests that would otherwise be perfect, except for one missing critical factor: no potential female companions. This is partly why the recovery of wolf populations often takes time.

So to recap, as they disperse, young wolves choose the locations of their new territories according to whether lands 1) are unoccupied by other wolf families and 2) contain food (prey species). But there is a third factor wolves are sensitive to – and that is 3) whether lands are reasonably free of human disturbance.

Across the world, the types of lands that satisfy the above requirements vary markedly.

Generally in Europe, wolves inhabit forests and marshlands: they squeeze themselves into the places least disturbed by humans.

But our continent is densely populated, and even our forests are heavily infiltrated by human activities. So where is there room for wolves you may ask? Recently, wolves have been surprising us. It was long thought they would, as a rule, avoid areas with too high human population densities. But they have in fact been turning up in the most unexpected places; they are more adaptable than we ever suspected.

When possible wolves select the most optimal habitats for establishing their territories: the remote forests in sparsely populated provinces or mountains. However, in Europe, the best forests have recently been rapidly filling up with recolonising wolf families. Wolves have consequently begun settling in less optimal habitats.

A case in point is the Bolimowski Landscape Park near Warsaw. There, wolves recently returned to a forest that is sandwiched between two medium sized cities and two busy roads that feed Warsaw.

Wolves seem to be doing very well in the human dominated forest of Bolimowski Lanscape Park. Here they are digging this years dens. Their pups will be born some time in April.

Wolves survive in these suboptimal forests by adapting their behaviour to that of humans. They avoid people by being active during the night, when people are inactive. Moreover, they often base their centres of activity, which is where they build their den and spend most of their time, in the quieter areas of forests. This is often a nature reserve, an army training camp, or simply a boggier area that humans avoid.

Contrast this with Asia, Russia and North America, which all have wilderness in abundance: steppe, taiga or tundra − wolves live there. In these areas, these are vast tracts of sparsely inhabited land where settling down is merely a case of choosing an unoccupied patch (and hoping you don’t get shot by poachers).

So to conclude, wherever in the world they may be, the ambition of every wolf is to disperse and find a vacant territory and partner. After this risky journey in young adulthood, wolves settle down into family life. They dig dens and give birth to pups. And for the rest of their lives, they stay with their partner firmly in one place – with no marauding across the landscape like the books of old suggest.

A wolf’s future is bright

With wolves now protected across much of Europe, the future of a young wolf pair has never been so bright. If a wolf survives the risky journey during his dispersal, then few unnatural causes of mortality remain, at least in the civilised countries where hunting is banned or severely limited.

Wolves are now dispersing ever further westwards in Europe, in search of suitable woodlands to call home. After decades of absence France and Germany now have healthy, growing wolf populations, and there are even odd sightings in Denmark and Holland.

It’s a shame that the English Channel is such an impenetrable barrier to recolonisation. The British Isles in this way are a perfect example island biogeography: islands are always more susceptible than continents to extinction, and subsequent recolonisation is next to impossible. But perhaps, in time, humans will help a young wolf pair disperse across the English channel, and wolves will grace the British countryside once again.

If you’ve enjoyed reading this article, you may also enjoy my history of the wolf.

2 comments on “The private life of wolves”