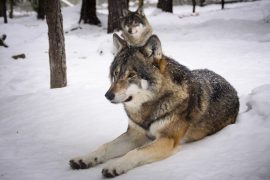 Deep in Europe’s forests, wolves are beginning to thrive once again. Some 1,500 now of these fantastic beasts now grace Poland, up from just 60 in the 1970s. But this remarkable recovery was never guaranteed: if our ancestors had succeeded in their ambitions there would be no wolves left at all. In this post I’ll run you through a short wolf history.

History of the Wolf

Way back in historical times the grey wolf was the most widely distributed mammal on earth.

Over the last millennium pressure on the wolf increased as the human population grew. Little by little, land was taken over for agriculture, decreasing the area of habitat available for wolves.

On top of this, people overexploited wild animal populations for food, leaving wolves with little wild prey to eat. To compensate for this, wolves raided more farms. This of course increased conflicts with humans, who swiftly introduced eradication programmes. Thus wolf numbers plummeted.

By the 20th century people had almost completed their extermination: wolves were confined to the wilder southern and northeastern parts of Europe.

Over time however, increasing environmental consciousness prevailed, and attitudes towards the natural world transitioned – from domination, to preservation.

In Europe, the first legal respite for the wolf came in 1979 with the Bern convention, a pan-European wildlife protection treaty. This legally protected the wolf across the whole of Europe. Even though many countries flouted their legal obligations (and still do), it paved the way for the return of the wolf.

In Britain, being an island nation, the history of the wolf is rather unique. Wolves went extinct early on – sometime in the 17th century – and then never recolonised due to the natural barrier of the English Channel. If wolves are to return, we will have to reintroduce them.

In Poland on the other hand, wolves were never completely eradicated and recolonised naturally from the wilder lands in the east.

History of the wolf in Poland

The wolf’s tumultuous post war history began with the communist regime deciding there was no place for the wolf in the Polish countryside. They introduced an intensive nation-wide wolf eradication programme in the 1950s, which put a bounty on the head of every wolf. For two decades, wolves were poisoned, and hunted with guns and fladry and their pups were stolen from their dens.

Inveitably, wolf populations were devastated. By 1972, wolves had become completely absent from central and western Poland, with only a few surviving in the east, and south-east of the country. The quest to exterminate the wolf was almost complete: there were 60 left.

By this point people’s mindset started to change. Not enough to accept the wolf living alongside. But enough to recognise they should be saved from oblivion. So some respite arrived in 1975 when the extermination programme was ended. The wolf became a managed game animal.

Shortly after, the Berne convention of 1979 was signed. It strictly protected the wolf across Europe. But unfortunately for the wolf Poland obtained an exemption and wolves continued to be persecuted.

Wolves did at least partially recover during this hunting management phase. Numbers increased to 850 by 1994. But remained mostly absent west of the Vistula.

The real turning point came when the Environment Ministry strictly protected wolves across the whole of Poland in 1998. This allowed them to gradually recover and recolonise the west of the country,

Even more protection arrived in 2004 upon Poland’s accession to the EU: enter the Habitats Directive, possibly the strongest and most comprehensive environmental legislation in the world. It was a boon for the wolf. It reinforced Poland’s already strict domestic policy, with an additional nuance. European law not only requires that a species merely exists, each separate subpopulation of a species must be managed separately so it can reach favourable conservation status.

This provides legal cover for each of Poland’s three wolf populations, which are now indeed reaching favourable status. Just take a look at the maps below to see what’s happened in Poland since we stopped shooting them.

Ten years ago, wolves numbered ~600 individuals in eastern and southern Poland, and were almost completely absent in the west of the country. But now, they have recolonised all forest complexes in the country, save a few smaller ones.

Today the Baltic and the Carpathian wolf populations have a red list status of least concern. On the other hand, the Central European population in western Poland shared with Germany and Czechia is still critically endangered, but recovering rapidly.

Luckily, current threats don’t pose a mortal danger to the future of any of the three populations. As long as legal protection continues, it’s likely that wolves will soon recolonise the remaining empty wolf habitat in the country.

Today few countries in the world have such healthy wolf populations as Poland. In fact, wolves have recovered so remarkably, that Poland has become a safe-haven and a source of strong young migrants for neighbouring countries. Though the fate of a young wolf dispersing across our national border can vary wildly.

If a wolf roams eastwards into Ukraine, Belarus, or even southwards to Slovakia, he is likely to get shot.

On the other hand, if dispersing westwards he will arrive in the largely wolf-empty lands of Germany and Czechia, where he will be strictly protected.

A fairy-tale ending for wolves in Poland is by no means guaranteed. While a return to widespread persecution is now unlikely, the increasing population is heightening tensions. Farming and hunting lobbies are powerful in every country and are always vocal about their disapproval of wolf protection. Moreover, in Poland, we now have an Environment Minister who is a both a hunter, and a forester who (literally!) believes man was sent down by god to subdue the land. Thus prospective wolf hunters dreaming of a vile trophy now have their best shot at changing the hunting law.

As L. Boitani wrote in 1995 “the most important issue in wolf conservation is public opinion”. Thus for the time being at least, it seems wolves in Poland have people on their side, and so are safe.

So to conclude, the recovery of the wolf in Poland is evidence that conservation can work, bucking the relentless downward trend of global biodiversity. This gives hope to a field that is often relentlessly negative – an exotic frog going extinct here; the rainforest burnt to a cinder over there. But the wolf proves it doesn’t have to be like that. If people put their minds to it, such remarkable stories can be replicated across the world.

0 comments on “The Wolf – A Short History”

As you're wandering a meadow a wolf jumps out. #bi

Hidden in a glade on the outskirts of Białowieża

When the woods carry you into an ancient world.