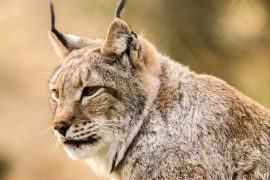 The lynx is perhaps Poland’s most charming carnivore. This enigmatic and mysterious animal of deep forests lives only in the most remote parts of the country: the highest mountains and vast, sparsely populated forext complexes of eastern Poland.

There are some 300 lynx in Poland between two transboundary populations: the Carpathian and Baltic. These number as follows (2011 data):

Despite having been strictly protected for the last 30 years, lynx appear unwilling to recolonise westwards. Individual lynx are sighted periodically in western Poland, but so far none have stuck around permanently. This could be down to their aversion to the increased human presence in western Poland, or the lack of available potential mates. Lynx are known to be fearful of non forested areas; thus unlike for the wolf, largely agricultural and deforested central Poland is an almost impenetrable barrier.

Notice the three forests near Warsaw with lynx present: Kampinos, Włocławek-Gostynin and Bolimow Forests. The lynx living here are descendents from a bizarre reintroduction programme implemented in 1993. Thirty (!) zoo-born lynx were let loose in Kampinos Forest after a short acclimatisation period. The mortality was high – it’s estimated some half of them died from car accidents, poaching and diseases. Nevertheless, this crazy plan appears to have succeeded. Reproduction was documented shortly afterwards, and to this day there is evidence of lynx living in the forest. Moreover, from Kampinos, the lynx migrated, colonising Włocławek-Gostynin Forest in the north, and Bolimow Forest in the south. Though for these forests, accurate population sizes are non-existent.

A more recent reintroduction has been occurring further north in Mazury. The WWF in partnership with various local organisations and stakeholders have been reintroducing lynx since 2006. Here a combination of zoo-born animals and translocants from Estonia have been released.

Overall lynx seem to be doing ok in Poland. Though it’d be nice for them to migrate to western Poland where they would find their favourite prey (roe deer) in abundance, the fact that they’re not dissapearing from the country is positive.  Perhaps given enough time some bold individuals from southern or eastern Poland will migrate through the wildlife corridors and settle the western-central European plain once again.

To find out where Poland’s other iconic species live check out my other status maps of the wolf, bear and bison.

8 comments on “Lynx in Poland. Where can we find them?”