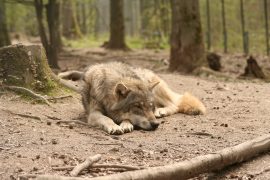 Wolves in Poland have recovered remarkably over the past decade, with around 1500 of them now inhabiting the country.

Only a few years ago wolves inhabited only the remote eastern forests and southern mountains. They can now be found all over Poland, even in woodlands adjacent to dense urban areas.

The Baltic and Carpathian populations are the largest and most stable populations in Poland. These recovered first after wolves became strictly protected in 1998. This is partly because wolves were never wiped out from these parts of Poland. The Central European population on the other hand had until recently been extinct for decades. But amazingly, from being extinct 10 years ago, it has now recolonised almost the entirety of western Poland. Young wolves from this population are now migrating in search of greener pastures to Germany, Czechia and even Denmark and the Netherlands.

Finally, the Roztocze population – this is an interesting one. It was only recently identified through genetic analysis, and it may actually be a subpopulation of the Baltic population. The Polish part of its range is healthy. But most of the population lives in Ukraine, and we know little about how it fares over there.

The table below shows the four different populations of wolves in Poland and their associated details. Some of these may be underestimates, as official government figures suggest there’s now a total of 1400-1500 wolves in Poland, between all the populations.

Ideally countries should share management of their wolf populations across national borders. And in fact, the Habitats Directive legally obliges EU member states work towards ‘transboundary management plans’. Though as of yet, no such plans are in place. This is perhaps unsurprising considering the logistics involved: some countries struggle to manage even a handful of wolves.

Moreover, with Poland’s eastern neighbours being outside the EU, Belarus, Ukraine and Russia have no incentive to cooperate. And in fact these countries routinely hunt or even exterminate their wolf populations. This unfortunately means that many young Polish wolves migrating across our eastern borders simply dissapear.

Sadly, Belarus has an extermination programme in place for eliminating 60% of its 1000 wolves. And Ukraine currently has more important issues than wolves and wildlife on its mind.

The countries to the north and south are somewhat in between. The Baltic states, which share the Baltic population, and Slovakia, which shares a portion of the Carpathian population, all cull many of their wolves each year.

Our western neighbours on the other hand are a safe haven. Czechia and Germany strictly protect their wolves – this makes them vast open lands to which our wolves can safely migrate.

Fun fact: Wolves in Poland only cost €100 a year each in compensation to farmers. For a little bit of wildness in our countryside, seems a bargain if you ask me!

To find out where Poland’s other iconic species live check out my other status maps of the lynx, bear and bison.

0 comments on “Wolves in Poland. Where can we find them?”