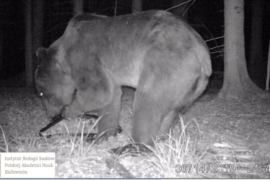 Bears went extinct here at the end of the 19th century due to over-hunting. Apart from a failed reintroduction programme in the interwar period, they’ve been absent ever since. In the last few days however, we obtained news that one was sighted in the south-east of the Polish part of the forest, which happens to be exactly where we are running our current experiment. We’d been hoping to find some traces of him, like some tracks in the mud, or a scat on a road. Never would I have imagined he’d walk right in front of one of our cameras!

The nearest bear population is 200km away in Naliboki Forest in Belarus – which is where we think he came from.

The bear was recorded by chance during a project studying the behavioural ecology of badgers, foxes and raccoon dogs at different locations in the forest. The study used a giving densities design (Bedoya-Perez, ‎2013).

0 comments on “We recorded a bear in Białowieża Forest!”