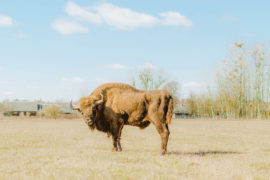 Białowieża Primeval Forest is one of Europe’s premiere natural wonders, and visitors are always eager to get stuck in and experience the forest’s prehistoric landscapes. But making the most out of a visit can be harder than many imagine.

New arrivals often become bewildered, and begin asking, where are the special parts of the natural forest? Where are the bison? Or how is this forest different from any other? Unfortunately, the answers to these questions are neither obvious nor readily available. So, to help you know where to go, I’m writing a series of informative articles for tourists. In time, I intend for it to become a sort-of pocket Białowieża Forest tourist guide.

What should one do in Białowieża Forest?

To put it succinctly: immerse yourself in the unique history and nature of the area.

History wise, there is an epic set of tales to read about, of kings and communists, of conservation and plunder. The forest was protected for half a millennium, before the plundering (logging) began a century ago. Although the plundering of the forest’s trees continues to this day, remarkably the forest has survived. To learn about this history, check out my article on the epic story of the European bison, whose fate has ebbed and flowed with the different periods in the forest’s history.

The natural history on the other hand, should be admired through hiking and cycling through the best-preserved parts of the forest. [Generally speaking, traversing the forest is easy. The forest is flat and intersected with a regular grid network of forest tracks, many of which have been turned into trails. All you need to know, is where are these trails and in which direction to head. To learn more, read on.

How to get around?

The forest covers a deceivingly large area and some parts are rather inaccessible. So the optimal way to visit the forest is with a car, a bike and a pair of walking boots. The areas at a short to medium distance from the village can be reached by bike or by foot (sections 1, 2 and 5 below). Whereas, the more remote areas (3 and 4), particularly the north of the national park, will require a short car journey to reach.

Bicycles can be rented cheaply in Białowieża Village (see Bike Café at the entrance to the Palace Park).

Due to logging over the past century, not all areas of Białowieża Forest are equally special: to find the real prehistoric landscapes, you have to know where to go. The best-preserved parts of the forest are within the national park, but there are also extensive areas of ancient woodland dispersed all over the forest area. There are 5 main areas with abundant ancient woodland and visiting any of them will feel like a walk in prehistory. In the future I will write separate articles dedicated to each of these parts of the forest, but for now, here’s a short description of each.

a) The forest around Białowieża village

Some of the best parts of the forest are within walking/cycling distance of the village. However, it should be borne in mind that the forest around the village is a mosaic of natural and non-natural (i.e. planted) forest; it is thus essential to know in which direction to go. Check out trails 1, 2 and 3. The walk down the border of the national park (trail 1) is particularly interesting, where you can see the effects of different management regimes: on one side of the trail you have the national park – forest that has been protected since time immemorial. On the other side there’s commercially managed forest – mostly devoid of old trees, dead wood and natural character.

Another nice trail is 3 the so-called Żebry Żubra ‒ literally, the ‘bison’s ribs’, a reference to the wooden walkway that spans most of the route. This trail begins down the road from Białowieża Village, and meanders through a lush, well-preserved nature reserve that showcases the forest’s main forest types: alder bog, deciduous, mixed deciduous, and coniferous forests. It feels and looks a lot like Jurassic Park and I highly recommend it. At the end of the route you can find the bison sanctuary.

The meadows behind the village are also the best place to see the European bison, the forest’s icon, in the wild. Here, they emerge from the forest at night to forage. Be sure to wake up before sunrise for your best chance to see them. Alternatively, arrive just before sunset; if you’re lucky, a few adventurous individuals may have emerged early from the forest to forage.

Finally, the best preserved part of the forest is adjacent to the village in the national park’s strict reserve. But due to the complexity of getting in here see the dedicated section below.

b) The national park’s strict reserve

This is the wildest and most special forest in Europe. It’s been a national park since the 1920s, but its protection extends back to the 14th century. It’s special because it’s never been logged and trees have never been planted here. While there are similarly natural fragments of forest dispersed throughout the entire forest area, the strict reserve is the most extensive and pristine. For the past century, access has been carefully regulated and only permitted with tickets and a registered guide. Even after these expenses, tourists are limited to walking down a well-worn trail (trail 5, either 4km or 14km). Though don’t feel short-changed; nobody is given unrestricted access to this most special forest, and despite the restrictions, it is still well worth a visit – there’s nothing else quite like it. Be sure to find a knowledgeable and experienced guide to make the most of your visit

Remote and seldom visited, in my opinion, the North of the national park is a real hidden gem of Białowieża Forest. It’s open to the public without a guide and hosts some of the most unspoiled parts of the primeval forest. This area was added to the national park in 1996, prior to which it was commercially logged. The area’s isolation and wetness however, meant that logging was, for the most part, relatively light and did not destroy the natural character of the forest. It’s now returning to nature at a rapid pace. The rapidity with which it is becoming wild is, to me, testament to the resilience of nature.

Accessible from Białowieża village by car. Take the Narewkowska road northwards through the forest, and park up in either Kosy Most or Masiewo to take a hike on one of the marked trails – 6, 7 (from Kosy Most) or 8 (from Masiewo). You’ll be able to see a variety of primeval forest types, including some surreal bog forests made up on several hundred-year-old birches or pines that are only 10 cm thick (along trail 7)! These types of wet habitat are suboptimal for tree growth, so these ancient trees become stunted despite their ancient age. Also notice the narrow-gauge railway – built by the German occupying force during WW1 to cart felled logs out of the forest. It’s a relic of the area’s history of forestry.

A hamlet set around an artificial reservoir once used to store logged wood over winter. It’s a 45 min or so drive from Białowieża, because there’s no direct road through the forest. Type Topiło into google maps to find the route. Despite the long drive around, it’s worth a visit. The forest has few areas of open water and so the lake makes for a nice contrast. At sunset you can expect romantic views over the lake, with the primeval forest reflecting in the water. There is a short educational trail that starts at the far end of the lake (trail 9). However, feel free to design your own route, as the forest tracks in the vicinity are all open to the public. In the south and east, there are extensive nature reserves with well-preserved old-growth bog forests and wetland habitats. The area’s remoteness makes for a worthwhile escape from the relative business close to Białowieża Village.

Białowieża Forest is shared between Poland and Belarus, and in fact, sixty percent of the forest’s area is across the wild eastern border. Belarus is normally a closed shop for tourists, but recent developments mean that a visa is no longer required to visit. Just log on to the Belarussian Białowieża National Park authority’s website (https://npbp.by/eng/) for instructions on how to obtain a three-day pass. Once you have this, you’ll be able to cross at the border crossing with a bicycle. In theory, the Belarussian part of the forest is far better protected than the Polish part, as it has all been protected as a national park for decades. However, what this means in practice is difficult to tell – a national park is a rather malleable concept over there, and a signature from the park director or Belarusian president can quickly change the management approach from day to day. Take a visit over there and see for yourself – let me know what you think!

f) Finally, for the adventurous types – the far south, on the Belarussian border.

When I cycled down here last year from Białowieża village, I felt like I was a 19th century explorer discovering some remote wonderland. Without another soul for miles around, it feels like the wild edge of the world. It’s inaccessible and rarely visited. There are no settlements or tarmac roads down here, neither are there any marked tourist trails. If remote and seldom visited natural landscapes are your cup of tea, then this is the place for you. A 2 h cycle ride from Białowieża Village on bumpy, sandy tracks is the only way to get here – if you get yourself a proper map you’ll be able to see these marked. Aim for the nature reserves on the Belarussian border. At the end you’ll be rewarded with cluster of lovely nature reserves with some of the best-preserved parts of the forest, with wild rivers and bog forests abound. For a short stretch, the meandering Leśna river makes up the Polish-Belarussian border before entering Poland. In many places rather than a river, you’ll find a wide river valley, with wetlands covered in reedbeds flanked by old growth forest.

For quiet, lazy afternoons, a visit to the zoo, museum or palace park may be in order. I won’t describe these in any detail because of the abundance of information already available. Just check out the relevant tripadvisor entries to determine whether these will be your cup of tea.

1 comment on “A brief tourist guide to Białowieża Forest”