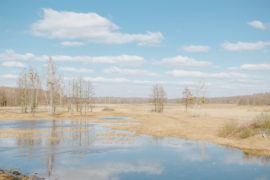 Białowieża Forest undergoes remarkable change over the course of a year. A visit during any season is worthwhile, as each has its own unique charm and character. Read on to find out what to expect in each of the four seasons.

Summer and Winter represent the two opposing states of the forest: the state of life and state of dormancy. Autumn and spring transition between them. Over the yeat the forest life ebbs and flows along with the changing temperatures. It flourishes as the temperatures warms, and retreats as it cools. The forest’s inhabitants adapt their lifestyles with the flux in atmospheric temperatures. In winter, Birds migrate to warmer climates, and bison gather in massive herds at feeding sites. In summer, the forest bursts into life as the leaves come out and the animals breed. Knowing how the forest changes over the year is important for tourists for two main reasons. Firstly, it determines the types of plants and animals you will see. Secondly, it determines the types of activities you’ll be able to carry out (cycling or skiing?). Oh, and also, thirdly, it determines how much you’ll freeze your balls off.

Summers are warm (20°C) and usually dry (but not always, so expect summer storms). The winters are traditionally cold and snowy, though with climate change snow cover has become unpredictable. Autumn and Spring have temperatures middling between those of summer and winter. Extreme temperatures are rare in this part of the world. You can expect a few >30°C days in summer, and a few <-5°C in winter.

The forest is alive. The animals are busy rearing their young, and the plants are busy putting down roots and shoots. This is the time to come if your want to see the exuberance of nature in full swing. With the weather warm and sweet, the days are perfect for both biking and hiking, and the evenings for beers and BBQs. Though, remember to carry water for hydrating in the mid-day heat and expect lots of insects.

Despite the forest-life being busy hustling, it can be more difficult than expected to see the animals. The undergrowth is dense and the forest floor is dark. The animals also have plenty to eat deep inside the forest, so have less reason to emerge out onto the meadows. Be still, the meadows are your best bet for seeing the bison, so check them out once or twice. Set off shortly after sunrise to maximise your chances of spotting them.

Finally, summer is the busiest period. But with Białowieża still being somewhat off the beaten track, aside from a few public holiday weekends, it doesn’t get too busy. Moreover, tourists heavily concentrate in the main villages and adjacent forest; many of the areas further away from Białowieża Village remain relatively quiet.

Though summer sometimes extends into September, by the end of the month the weather inevitably turns to Autumn. This is the trigger for the forest to prepare for winter. The animals fatten themselves up or store food. The tree leaves flow through a procession of exquisite colours, from light green, to golden yellow, to reddish brown. The leaves then drop, and stunningly carpet the landscape. Meanwhile flocks of cranes migrate overhead, with their eerie calls reverbating throughout the forest. It’s a truly magical time, and, in my opinion, the most atmospheric of the whole year.

In Autumn there are two events of particular interest to tourists. The first, starting in mid-September, is the rut, the red deer mating season. The males, full of testosterone, roar throughout the night in an attempt to attract females, generating a truly electric atmosphere. Second, is the pinnacle of the changing colours, at the end of October/beginning of November. At this time the trees race to lose their leaves before the first frosts. In their hurry, the forest becomes splattered in an incredible assortment of reds and golds, somewhat resembling the vividity of an acid trip. By December, the forest is dormant. Most birds have migrated, all the greenery has fallen, and the animals that are left ready themselves for the long night.

The forest lies dormant. It’s often gray and bleak, but once the snow arrives, a fairy tale emerges. Plants and birds all but disappear, leaving only leafless trunks, owls and woodpeckers. On the other hand, it’s the best season for seeing land mammals. The forest opens up, as the undergrowth dies and canopy opens. The forest floor is finally splashed with light, making the perfect photography conditions, at least on rare sunny winter days. A bonus of this time of year is that the insect have finally gone – there are no tick or mosquito pests.

One of the most notable changes is how the bison change their behaviour. A few bison still emerge from the forest each night, to forage on the meadows surrounding the villages. But most are lazy and gather into enormous herds and at feeding spots dispersed throughout the forest. Both the meadows and feeding spots are guaranteed places to spot bison in winter, but be careful, as entering the feeding stations is not allowed. There is only one feeding station open to the public, in the north of the national park (at Kosy Most).

Unfortunately, climate change is rapidly and radically altering Białowieża Forest’s winters. Between 1967 and 2017 the length of snow cover in Białowieża Forest has almost halved (from 80 to 40 days). Average temperatures have increased by two degrees; erratic changes in temperature have become more frequent. It usually snows by the end of December, but there are often spells of mid-winter snow free periods. Be sure to go cross-country skiing after fresh snowfalls!

The awakening. By March it feels like winter has lasted forever, but slowly but surely, things begin to change. The temperatures finally rises above freezing in March, but little changes until April. Life begins its return to the forest with a trickle, but by mid-April the waterfall begins to flow. While the canopy is still open and the leaves are budding, the forest floor rapidly bursts into life. Starting in March, each successive week brings new flowers, eager to capture the light before the trees greedily block out the light with their leaves. Simultaneously, the birds that wintered over in southern climes return. The most eager storks already begin to appear at the end of February, but most come later. May brings a full spectrum of greens, as the leaves take on their summer shapes. They gradually block out the sun and the forest floor darkens. As plant-life moves from the forest-floor up to the canopy, summer finally takes the place of winter.

If you’re planning a trip to Białowieża Forest, be sure to check out my brief tourist guide

0 comments on “When to visit? The climate of Białowieża Forest”

A game of where's Wally with a fox in the morning

The little poser. This is a selection of my photos

Of all my photos of moose, this is my favourite. I

Recently a wolf's been regularly running around Bi

Ice fishing. I never imagined I'd see an Arctic sc

This is the view over Morskie Oko, a glacial lake